First Fire Juggling of the Season 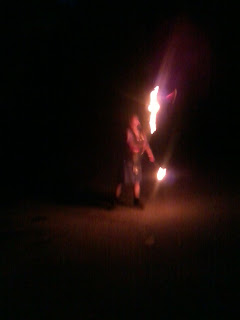 The first fire juggling event of the season took place last night. And of course that mean the first blurry camera pic of someone juggling fire. Incidentally that is me juggling my torches. It was great fun. We had all kinds of people on hand just not too many of them. We had some kids, some drummer and even a guy on didgery doo. I really have no idea how to spell didgery doo and have no desire to look it up. You know that Australian instrument.

After we had our inaugural battle with the fishermen we go down to juggle and poi. This year I even joined in on the poi with the brigade's set of led power poi. I am not quite up to the fire poi stage of the game yet.

Anyway, if you are a juggle, spinner drummer of player of Australian instruments I cannot spell show up on the 11th. Fire Juggle starts at dusk. Juggling lessons start at 7:00.

Be safe out there and keep your stick on the ice.
Posted by Z at 1:25 PM