Show at the Propel School 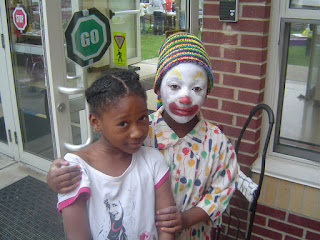 Friday June 12 we had a very nice little show at the Propel School. Thr Propel School is a Charter School that is Physically next to The Salvation Army in Homestead. It is also a school that several o the Children from the Corps and Sergeant Proileau attends.

This is Popie and Apprentice Brimage outside the Propel School just before the show. As you can tell the both of them are adorable. And they took a moment for a picture just after we set up.

This was the first time that we ever did anything other than a stage show away from The Corps. We used four hundred and 98 Balloons. That is a crazy amount of Balloons to use in under five hours. It is not something one clown could do. It is also a testament to the skills of these young 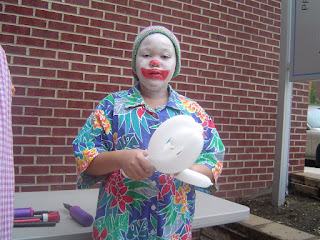 clowns and the training they have done.

This is a Picture of Alakazi working on a Snake for a young man during the show. I figure that she personally use around one hundred and fifty of the balloons. That mean that we was working at the rate that you would exspect a Jr. Clown from the Circus to work at.

She may not look like she is Happy but she is happy on the inside. It is sort of unfair to take picture of us while we are doing ballon with thrity kids waiting for their balloon. The reality is that we can look happy the majority of the time. And at that split second when the picture is take you have a frustrated look because of a balloon you are working on. Well nothing is perfect. Still we had fun at the show.
Posted by Z at 7:24 AM